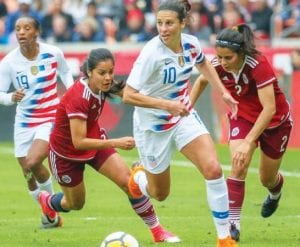 On Monday June 24, the US Women’s Soccer team had a 2-1 win against Spain and are now headed to the quarterfinals of the World Cup.

Spain is the 13thranked team in the world, and was playing in its first World Cup knockout game.

“If they had to win through penalties, it’s because we’ve shown our worth and we’ve given them a run for their money,” Spain coach Jorge Vilda said.

The US team is truly top-notch in women’s soccer with the titles and accolades to prove it. It’s a three-time World Cup champion, a four-time Olympic gold medalist, and it came into the tournament as the No. 1-ranked team in the world.

The Americans are set to go against France in the next World Cup game.

For many sports fans this is a disappointment as it is so soon for two top-tier teams to go against each other.

“Hopefully, it’s a spectacle! An absolute media circus! I hope it’s huge and crazy, because that’s what it should be,” US Midfielder Megan Rapinoe said.

“This is the best game. This is what everybody wanted,” she continued. “We want it. Seems like they’re up for it. . . . These are the biggest games, that you kind of dream about as a kid.”

FIFA allocated a majority of available World Cup tickets to the French people, who accounted for 460,748 in sales, according to the Associated Press. After the French, Americans accounted for more ticket purchases — 130,905 — than the rest of the world combined.

“So many times when we play in big games, it’s actually where I get more excited,” Amercian Coach Jill Ellis said, according to Sports Illustrated. “So when we have our pregame meetings, it’s more. Because it means more, it matters more, there’s more at stake, and that’s why you do this. You don’t go into one, professional sports, or two, coaching, if you’re not in it for those purposes and those reasons.”

The game will be Friday at 3pm at Parc des Princes Stadium in France.