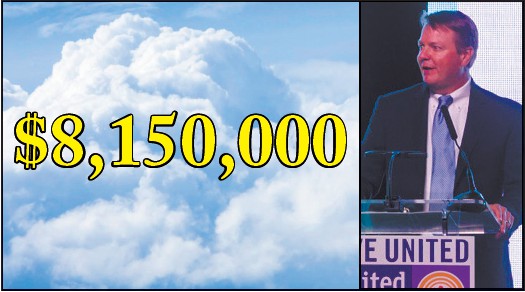 After two weeks’ delay due to Hurricane Dorian, United Way of the Coastal Empire kicked off its 2019 annual campaign with a fundraising goal of $8,150,000. Funds raised will be invested into local health and human service programs that improve the lives of people in Bryan, Chatham, Effingham, and Liberty Counties. The organization announced the goal Thursday afternoon in a kick-off event at the Savannah Civic Center.

The 2019 fundraising campaign is led by Savannah Market President Ken Rabitsch of Synovus. Together, with his team of volunteers who comprise the Campaign Cabinet and United Way Ambassadors, Rabitsch will carry the campaign message, “We Are One,” to employee groups, businesses and individuals across the community.

“Raising $8,150,000 through United Way will take all of us, from every walk of life, pulling together to help one another,” Rabitsch said. “Each of us, doing what we can, whether it’s $1 a week, $10 a week or even $50 a week, can truly make a difference. The power of one individual supporting United Way can have a tremendous impact on the life of a person or family.” During the luncheon, local businesses within the community reported results from their campaigns that were conducted in early August. These “Pacesetters” got a head start on their campaigns in order to set the bar for the community campaign as a whole. This year’s Pacesetters have helped to kick-off the campaign with $558,368 or 6.85 percent of this year’s goal.

United Way’s 2019 campaign will run from September 5th through November 21st. Individuals can give by visiting uwce.org/give or text UWCE to 565-12.

United Way thanks Georgia Power, Stage Front Presentation Systems, and Synovus for contributing to the success of the event.