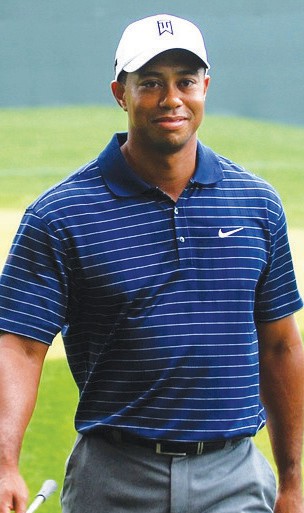 The fourth round was suspended because of darkness Sunday, and Woods took a three-stroke lead over Matsuyama into Monday in the first official PGA Tour event in Japan. He bogeyed his first hole Monday, the par-four 12th, but was solid the rest of the way with birdies on Nos. 14 and 18 to finish at 19-under 261. Matsuyama also closed with a 67. Rory McIlroy, the highest-ranked player in the field, completed his round with two birdies for a 67 to tie for third at 13 under with Sungjae Im. Im had a 65. Woods opened with consecutive 64s, with a day off in between because of rain. He had a 66 on Sunday in the third round. The total purse given out for the no-cut, limited-field event at Accordia Golf Narashino Country Club outside Tokyo was $9.75 million. That matched the largest prize money payout for any tournament on the PGA Tour that isn’t a major championship, a WGC or the Players. Tiger Woods took home more than $1 million—$1,755,000 to be exact. The runner-up, Hideki Matsuyama, earned $1,053,000 as he tried to grab a victory in his home country.