Savannah native Trevion Lamar will play his senior season of college basketball at the University of Texas Permian Basin, a Division II school that competes in the Lone Star Conference.

“Trevion brings a great deal of versatility, talent, and length to the Falcon program,” said UTPB head coach Josh Newman. “As a player, he is a modern forward who has the ability to dribble, pass, and shoot with exceptional feel. His ability to defend multiple positions, as well as effecting the game on the offensive side of the floor with mismatches and being a perimeter threat. Trevion will be a valuable asset from day one.”

Lamar spent the 2019-20 season at Georgia Southern. While at GSU, Lamar played in 15 games where he scored 32 points and grabbed 36 rebounds on the year. He scored a season high 11 points in a win over UT Arlington.

Prior to Georgia Southern, Lamar played at Northern Oklahoma College. The 6-foot-5 guard averaged 18.1 points, 6.5 rebounds, 2.8 assists and 1.4 steals during the 2018-19 campaign. He was named Region 2 Preseason Player of the Year and a Street & Smith’s Preseason National Second Team JUCO Super Sophomore. As a freshman, Lamar was named First Team All-Region and First Team All-OCAC after averaging 16 points and eight rebounds. 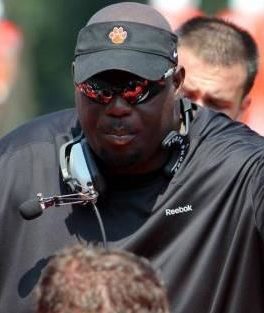 Jackson has a proven record of success as a defensive strategist, teacher and recruiter,” said DSU head football coach Rob Milstead. “His experience at many levels of the game will be valuable to our coaching staff and program.”

Jackson, who brings nearly 20 years of coaching experience to the position spent the 2019 season as the defensive line coach at Albany State.

In 2018 and ‘19, Jackson was an assistant at Your Call Football, an interactive competition in which participants call plays in real time for a series of live exhibition American football games with players, some of whom have played in the NFL or CFL. The participants watch the game via live streaming media and use a smartphone app to select the plays.

From 2013-18, he was an assistant coach/coordinator at Savannah State while the Tigers were a FCS program and member of the Mid-Eastern Athletic Conference.

Jackson made history as the first African American head coach at a majority institution in the West Virginia Intercollegiate Athletic Conference while at West Virginia Wesleyan from 2009 -12. He also served as head coach for the Elancourt Templiers of the European Pro League in 2005.

A former standout player at Eastern Michigan, Jackson earned his bachelor’s degree from EMU in 2002 and a master’s from Valparaiso in 2004.

Casem graduated from St. Augustine High School in Memphis, Tennessee. During the first week of his freshman year at Xavier University of Louisiana, he met his future wife, Betty Jean McCain. After graduating from Xavier, he became certified in Corrective Therapy.

Casem began his career in education and coaching at Utica Junior College in Mississippi after serving in the United States Army from 1957- 59. He then joined his wife at Alcorn State University where he was assistant football coach and instructor in health and physical education. He received his master’s degree from the University of Northern Colorado.

In 1963, Casem became the head football coach at Alabama State University and posted a 2-8 record. He returned to Alcorn in 1964 as head football coach and assistant professor of health and physical education. He served as the Braves head football coach for 22 years and won seven SouthWestern Athletic Conference titles and four Black College National Championships. Casem’s 1984 team had a 9–0 regular season record and the team was ranked No. 1 in the final NCAA Division I-AA poll, the first time a black college had ever finished the regular football season in that position. Casem compiled a record of 138–71–8 at Alcorn State. In 1966, he became the Braves Director of Athletics.

Casem also served for many years on the NCAA’s Football Rules Committee and Executive Committee During his professional career, he received numerous awards and citations. A few of the many notables are the following: Southwestern Athletic Conference Football Coach of the Year in 1968, 1970, 1973, 1974, 1976, 1979, 1984, The National Football Foundation and College Hall of Fame 2003, Black College Football Hall of Fame 2014, Doctor of Humane Letters Alcorn State University 2017, ESPN’s Top 100 Greatest of All Time Football Coaches. Casem’s head coaching record was 159-93-8.

A private graveside service was held on May 2 at Green Oaks Memorial Park Cemetery.