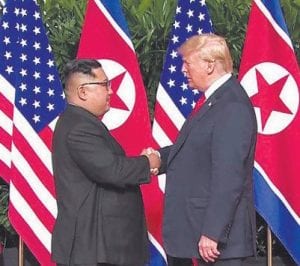 President Trump and North Korean leader Kim Jong Un signed a document stating that Pyongyang would work toward “complete denuclearization of the Korean Peninsula”— a historic concession, which was one of the requirements the U.S. sought at the summit in Singapore.

For Trump, that amounted to a triumphant outcome. There were no real details on what new commitments had been made by Kim, even as Trump announced he would end the regular military exercises the US conducts with South Korea.

Whether nuclear disarmament is indeed the final outcome of Tuesday’s summit won’t be known for years, if not decades. But the dramatic act of extending his hand to one of America’s longtime adversaries will demonstrate Trump’s gut-driven, tenure for a long time. “We both want to do something. We both are going to do something. And we have developed a very special bond,” Trump said at the conclusion of the landmark summit.”

The document he and Kim signed said the North Korean leader “reaffirmed his firm and unwavering commitment to complete denuclearization of the Korean Peninsula.” In exchange, Trump agreed to “provide security guarantees” to North Korea.

Tweets by TheSavannahTrib
By continuing to browse or by clicking 'Accept', you agree to our sites privacy policy.AcceptPrivacy policy