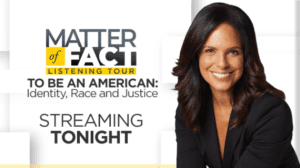 The “Matter of Fact Listening Tour,” hosted by Soledad  O’Brien, continues its exploration of difficult issues surrounding race and equity in a new  digital presentation, “To Be An American: Identity, Race And Justice.” The special will  stream beginning at 7 p.m. Eastern on Thursday, March 18, on WJCL.com as well as  matteroffact.tv and other Hearst consumer media digital platforms reaching millions of  consumers.

The “Matter of Fact Listening Tour” will continue throughout 2021 with a series of forums  employing the digital platforms of many of Hearst’s consumer media brands, including 33  television stations; newspapers around the country; and many of the world’s most popular  magazines — and on Matter of Fact’s website, YouTube and Facebook Live channels.

The March 18 episode, “To Be An American: Identity, Race And Justice,” follows the  initiative’s highly acclaimed first production, “The Hard Truth About Bias: Images and  Reality,” which University of Maryland Professor and Brookings Institution Fellow Dr.  Rashawn Ray called “the best show that I have been on that addresses #racism”; another

guest, Mahzarin Banaji, professor of social ethics in the Department of Psychology at  Harvard University who is renowned for her work in the area of implicit bias, plans to add  the “Matter of Fact Listening Tour” to her university curriculum. The 75-minute October  2020 debut episode, “The Hard Truth About Bias: Images and Reality,” continues to stream at matteroffact.tv.

Throughout the March 18th program a diverse lineup of guests from academia, literature  and entertainment will share personal stories, essays and insights to bring greater  understanding to the complex topic of race, identity and belonging. Matter of Fact contributors Jessica Gomez and Joie Chen will provide reports and interviews from  around the country, while veteran journalist Ray Suarez will chronicle the history of

Chinese Americans who helped build U.S. railroads but were denied citizenship. Viewers  will be challenged to address questions such as, “What unites the United States, and  what is it that truly makes America exceptional?” The program will open with a citizenship  pop quiz, which encourages viewers to think about what those not born in this country  must learn in order to become Americans.

“The Matter of Fact Listening Tour explores the beliefs and influences that have the power  to bring us together and also divide us,” O’Brien said. “Through the lens of race and  equity, we will examine and challenge some of the founding views and principles of our  country and our history. Are we bound together by an elegant legal document written in  the 18th century, or does a more contemporary set of values that evolves over time lead  to a more perfect union? We’ll seek to address these and many other questions at this  stop on our ongoing tour.”

“We are proud to continue, and build upon, the important conversations around social  inequity and injustice the ‘Matter of Fact Listening Tour’ provided in its debut last fall,”  said Hearst Television President Jordan Wertlieb. “These programs are meant to create  honest and sometimes difficult dialogue about the zeitgeist of today’s society and I can’t  think of anything more timely than to examine what it means to be an American from all  perspectives.”

“WJCL 22 is leaning in to find the ways to connect our community,” said WJCL President  and General Manager Ben Hart. “These candid conversations mean a lot to facilitate a  platform of conversation for Savannah and the Lowcountry to come together.

Guests scheduled for the March 18 program include: