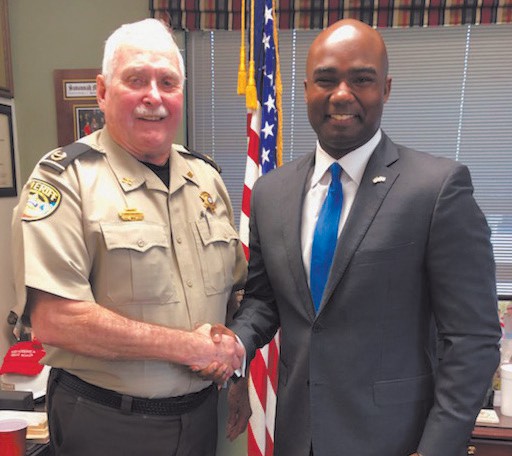 Chatham County Board of Elections Member Antwan T. Lang and Chatham County Sheriff John Wilcher Sr. has partnered to ensure County inmates that are legally eligible to vote have access to the ballot box this coming 2020 election cycle.

Many Americans held in local and state jails awaiting trial, are legally eligible to vote. Each election cycle, however, countless numbers of them are excluded from participating in the democratic process because of structural barriers to voter registration and voting. Lang believes it’s his along with every leaders’ responsibility to use their influence to break down these barriers. Lang says “As a member of the board of elections and as a leader, I must make every effort to-have honest and open dialogue with other leaders and organizations to expand equal access to voting for all citizens. This includes our citizens awaiting trial and have not been convicted of a crime that would make them ineligible, such as a felony conviction.”

Lang approached Wilcher about the subject a year ago and the sheriff was in agreement. “As sheriff, I am responsible for everything that happens or fails to happen concerning the county jail. It is my duty to ensure the health, safety, and rights of every inmate are protected while also ensuring the safety and well-being of my deputies and staff. I was proud when Mr. Lang and I sat down to discuss this important topic” Wilcher said. In most instances, these individuals—many of whom come from low-income communities and are people of color—are systematically prevented from having their voices heard due to a lack of access to voter registration forms, absentee ballots, voting booths, or critical information on voting eligibility. They must also be able to vote not only by absentee ballot but in-person. Lang believes the latter can be achieved through secure transportation to a local polling place which is totally under the sheriffs’ authority. Inmates may use the jail’s address to have an absentee ballot mailed to them as well. Sheriff Wilcher has for many years, allowed groups such as the Savannah Branch NAACP, access to the inmates to register them to vote and has taken several steps to ensure inmates have an opportunity to participate in the political process.

According to the American Civil Liberties Union and Right to Vote, “Voting While Incarcerated” article— “Americans housed in jail while awaiting trial are legally permitted to vote unless they are ineligible for reasons unrelated to their current detention— such as age, citizenship status, or, in some jurisdictions, a prior felony conviction. In short, because they have not been convicted of the crime for which they are being detained, people awaiting trial retain the right to participate in elections under the U.S. Constitution.” Lang emphasizes the point in the article that “taking away the voting rights of an eligible person awaiting trial is not only illegal, but it also violates the foundational norms of the U.S. criminal justice system, particularly the presumption that criminal defendants are innocent until proven guilty.” It continues to express that “protecting the right to vote for people detained in jail while awaiting trial is particularly important considering that felony charges can be dismissed or reduced to lesser charges that do not trigger disenfranchisement.”

The two, an unlikely pair—one an elected democrat and the other an elected republican— agree that no matter their party affiliation, as leaders they must see people as people and treat them with dignity and respect. Lang serves on the Chatham County Board of Elections and as an executive board member of the Savannah Branch NAACP. He says the organization has a long history of ensuring the rights of every citizen is protected. Wilcher is also a supporter and life member of the organization.

Voter registration deadline to vote in the 2020 Presidential Preference Primary/Special election is February 24th, 2020. Absentee voting by mail is available from February 4th, 2020-March 20th, 2020. Early in-person voting is available 21 days prior to the election. Any eligible registered Chatham County voter desiring to vote in advance during this period may do so in-person. No reason is required. Early in-person voting begins March 2nd – March 20th, 2020. The 2020 Presidential Preference Primary/Special election will be held on March 24th, 2020.