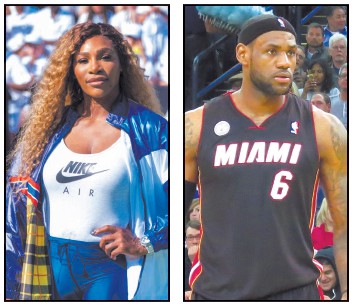 Serena Williams has won a total of 23 Grand Slam singles titles — the most of any professional tennis player in history — with a dozen of those coming in the last decade! Between 2010 and 2019, Williams won four at Wimbledon, three at the U.S. Open, three at the Australian Open, and two at the French Open. She has also made it to the finals in 19 of the 33 majors she entered in the decade.

Williams has also held the No. 1 spot in the Women’s Tennis Association (WTA) rankings for three and a half years straight. She has also won the AP’s Female Athlete of the Year award a total of five times, with three of those being in this decade: 2013, 2015, and 2018! She has won gold medals in the 2012 Olympics in singles and in doubles with her sister, Venus Williams. At 38 years old, Serena Williams is the oldest woman to win a Grand Slam and the oldest woman to be ranked No. 1 in WTA history.

Off the courts, Williams has advocated for women’s rights, particularly in the area of health care inequality. After Williams and partner Alexis Ohanian welcomed daughter Alexis Olympia, she suffered a multitude of medical complications after delivery and nearly lost her life. She went on to write an opinion piece for CNN detailing her experience, the care she received due to her position, and the alarming maternal death rates for black women.

LeBron James has scored the most points on any NBA player in the past decade, including playoffs. After starting the decade on the league’s career scoring list in 124th place, James had climbed the list to 4th place, behind only Kareem Abdul-Jabbar, Karl Malone and Kobe Bryant (first, second, and third place respectively)! In November 2019, he became the first player in league history to have a triple-double (recording double digit numbers in three different stat categories during a game) against all 30 NBA teams. LeBron James also played in eight straight Finals games while holding the title for winning the most games and MVP awards over the past decade. In the beginning of the decade, he was widely criticized for leaving the Cleveland Cavaliers to head over to the Miami Heat, where he went to the Finals each of the four years he was there, finally winning the title in 2012 and again the following year. James returned to Cleveland in 2014 and led them to four consecutive Finals with a win in 2016. In 2018, he headed to the Los Angeles Lakers, a move that may have been encouraged by his acts in Hollywood off of the court, including his program entitled “The Shop: Uninterrupted” which highlights the barbershop experience while inviting guests to talk about culturally relevant topics.

James is also very socially active. He has used his voice to bring awareness to the killing of unarmed teen Trayvon Martin, Hillary Clinton’s presidential campaign, and Colin Kapernick’s racial injustice and police brutality protest. He also brought attention to the current plight of college athletes. On his program, “The Shop”, he invited California Gov. Gavin Newsom to sign a bill that finally allows college athletes to get paid for their likeness and sign endorsement deals. He is also very involved in the “I Promise School” that he opened in his hometown of Akron, Ohio in 2018.