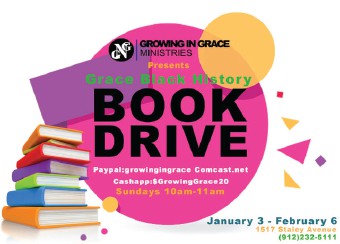 Since 2019, only 11 percent of children’s books had African American characters. The issue of representation is exacerbated with Covid-19 limiting some students’ access to schools and libraries. Public elementary schools in the Savannah-Chatham County School District, based on Public School Review, have a reading proficiency score of 29% which falls below the state average of 41%. Our district’s average elementary testing ranking resides at the bottom 50% of public elementary institutions in Georgia. The schools with the lowest proficiency scores are typically majority-minority. It’s no question that the unlearning since Covid-19 will have generational impacts, disproportionately affecting public schools and minorities. Outside of public policy that should be taken to aid these institutions, the Savannah community can promote reading and representation right now. Growing In Grace Ministries, located at 1517 Staley Avenue, will be hosting the Grace Black History Book Drive from January 3 through February 6. The goal is to collect and purchase 130 children’s books for primary school children who may not have access to books in the home and who have never seen themselves in literature. Essentially, if 100 people across the community donate $20, over 100 kids in the Savannah community will gain more than a book they will gain a reflection of themselves. This contactless initiative has three donation funds (Paypal: growingingrace@comcast.net, cashapp: $Growing- Grace20, Givelify: Growing in Grace Ministries). Physical donations can also be dropped off on Sundays between 10 am and 11 am at Growing In Grace Ministries.

The youth-led book drive (Madison Jennings: Project Executive, Margeau Cutter: Social Media Curator, Saniyah Coray, and Myles Cutter: Media), is powered by the legacy of the hundreds of black Savannians who took immense pride in “secret schooling” which survived almost a century of enslavement. Between 1886 and 1870, nearly 200 black women and men led schools across Georgia. Before the arrival of northern missionary educators, it was the local community that preserved literacy during and after the era of Reconstruction. It’s up to us, in 2021, to invest in the Savannah community in this time of crisis. Giving our children the priceless gift of education honors the legacy of those before us and after us.